Online seminar: Art as a Catalyst for Change

Can art bring us closer to a more sustainable future? 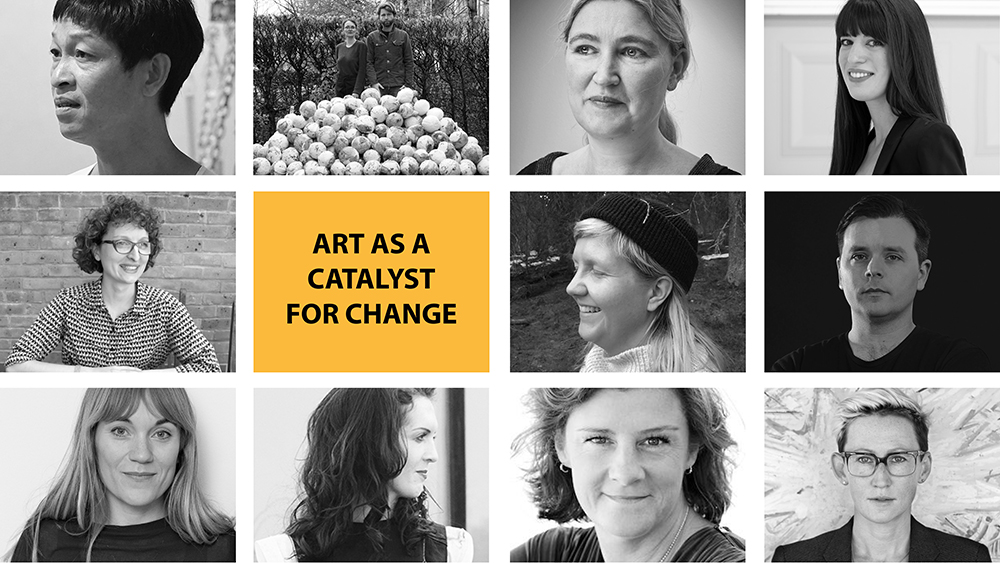 Link to online seminar
Sustainable Societies for the Futute

As the fight for an ecologically sustainable future intensifies, we turn our attention to art. What can we learn and what can we expect?

Malmö Art Museum in collaboration with Expo Chicago, US, and Nordic Talks invites you to a digital seminar focusing on the connections between contemporary art practices and ecological sustainability.

How can artists work more sustainably in relation to natural resources and energy use? Is there such a thing as 'sustainable' art and what could a sustainable exhibition production look like? What role has nature played in contemporary art and how does it reflect our view of ourselves? Can art formulate new ways of relating to the world that integrates us on a deeper level in the greater environmental systems?

You are invited to a 2,5 hour seminar entirely devoted to these and many other issues, with the hope of arousing critical thoughts and initiating necessary conversations. How can we make our societies more sustainable, inclusive and secure in the light of the enormous changes that await us? Can art help us to inspire collective action, and can art also meet the stricter demands that will increasingly be placed on us as individuals and on institutions and society?

To expand on and gain more for all the seminar's questions, we also hope that you want to take part in the presentations and participate in the discussions.

There will also be a screening of the performance The Queen of the night by Swedish artist Ingela Ihrman.

Tominga Hope O'Donnell is senior curator for Contemporary Art at the Munch Museum in Oslo. Her educational background includes a BA in Modern History and Politics from the University of Oxford (2002) and an MA in Curating Contemporary Art from the Royal College of Art in London (2008).

Luise Faurschou is a curator, cultural entrepreneur and founder & director of Faurschou Art Resources and ART 2030, a nonprofit organization uniting art and the United Nations 2030 Agenda for Sustainable Development and its 17 Global Goals.

Danh Vo works mainly with concept-based installation. He was born in Vietnam and currently lives and works in Berlin and Mexico City. Emerging from personal relationships and fortuitous encounters, Vo’s projects take their final form as objects and images that have accrued shifting layers of meaning in the world, whether through their former ownership, their proximity to specific events, or their currency as universal icons.

Kirse Junge-Stevnsborg is the director of Malmö Konstmuseum. She has worked internationally as director or curator for institutions such as Tate Gallery, ART 2030, Den Frie Centre for Contemporary Art in Copenhagen and Dunkers Kulturhus, Helsingborg.

Stephanie Christello is a critic and curator living and working in Chicago, IL. She was previously the Senior Editor US for ArtSlant (2012-2018) and is the founding Editor-in-Chief ofTHE SEEN, Chicago's International Journal of Contemporary & Modern Art. Her writing has been published in ArtReview, BOMB Magazine, Elephant Magazine, Frieze Magazine, OSMOS, Mousse Magazine, and Portable Gray, published by the University of Chicago Press, in addition to numerous exhibition catalogues nationally and internationally. She graduated from the School of the Art Institute of Chicago in 2013 with a Liberal Arts Thesis in the Visual Critical Studies Department. In 2020-21 Cristello was a Curatorial Advisor to the Busan Biennale and Guest Curator at Kunsthal Aarhus. She is currently an Artistic Advisor to EXPO CHICAGO, the International Exposition of Contemporary & Modern Art, and the Director/ Curator at Chicago Manual Style. Her forthcoming books are Theodora Allen: Saturnine (Motto, 2021) and Barbara Kasten: Architecture and Film 2015-2020 (Skira, 2021).

Mary Mattingly is an artist based in New York City. Her work has been exhibited at Storm King Art Center in New York, Palais de Tokyo, the Museo Nacional de Bellas Artes de la Habana and the Bronx Museum of the Arts. She founded a floating food forest in New York called Swale. Her work has been featured in Artforum, Sculpture Magazine, The New York Times, Le Monde and on BBC News, MSNBC, and on Art21.

Joa Ljungberg, Curator for Moderna Museet Malmö, has in several exhibitions explored our human condition in a rapidly changing world. Her comprehensive project The New Human (2014-16) looked at the formative impact of globalization, digitalization and an accelerating technological development. Her recent exhibition, Sensing Nature from Within (2019), presented artists that in various ways have contributed to a rethinking of the western modernist notion of nature, and of ourselves as part of nature. Earlier curatorial assignments include The National Public Art Agency Sweden 2004-2008, The Tirana Biennial of Contemporary Art (2005-2009) and GIBCA – Gothenburg Biennnial of Contemporary art (2007).

Lucia Pietroiusti is a curator working at the intersection of art, ecology and systems, usually outside of the gallery format. She is Curator of General Ecology at the Serpentine Galleries, London, a strategic, cross-organisational effort dedicated to the implementation of ecological principles throughout the Galleries’ public-facing programmes, internal infrastructure, and networks. Pietroiusti is the curator of Rugile Barzdziukaite, Vaiva Grainyte and Lina Lapelyte's Sun & Sea (Marina), the Lithuanian Pavilion at the 2019 Venice Biennale and its 2020-2022 international tour.

Sean Raspet is an American artist based in New York. Raspet is known for his artworks that consist of liquid chemical formulations, often involving flavor and fragrance molecules. Recently, his work has begun to involve food and human metabolism. Raspet is also the co-founder of the algae-based food company Nonfood.

Malin Lobell has been working with plant-human relations for more than fifteen years, combining her skills as artist and gardener. She has initiated and facilitated community gardens and creative collaborations with researchers, schools and municipalities. Together with Janna Holmstedt, she initiated (P)Art of the Biomass, a research and artist collective. Through interdisciplinary projects, participatory processes and artistic interventions, they inspire thoughts and action and create new forms of collaboration, where multispecies relations as well as environmental care and attention can be cultivated. She is also part of the art and research project Humuseconomicus.

Sanna Ritvanen (b.1989 in Sotkamo) is a multidisciplinary art and cultural worker. Ritvanen is an active member and vice chair of Mustarinda-association. During their 4 years in Mustarinda, Ritvanen has worked for the association e.g. as a residency coordinator, cook, caretaker, producer, renovation worker and artist.

Gamborg/Magnussen is an artist duo from Denmark who work internationally on large scale projects. They created The Cabbage Patch in Chicago’s Garfield Park for the 2019 Chicago Architecture Biennial. A patch of 10 000 cabbage heads for local residents to collect, cook and meet around, in an effort to promote discussions on land use, agriculture, relations to common objects and memory.