A symposium with presentations by Sam Hultin, Tore Hallas, Vala T. Foltyn and Ming Wong, a performance by Sandy Harry Ceesay and a film screening of Wu Tsang’s Wildness. 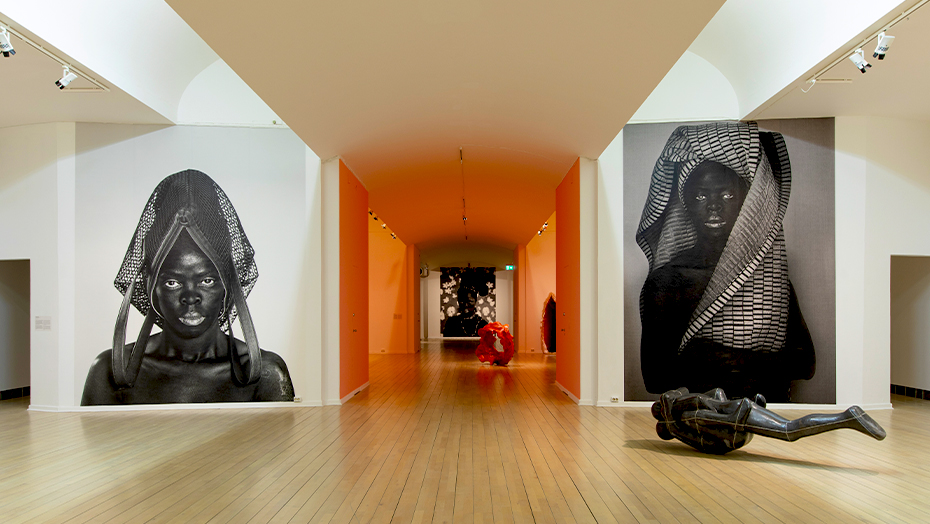 In conjunction with the exhibition (in)visible: abstractions and fragments of queerness, Malmö Konstmuseum will host a symposium on Friday, 10 December, 2021 curated and organised by Tawanda Appiah and Jari Malta. The symposium presents a moment for knowledges, practices, embodiment and conviviality. It is built upon the conviction that art history, theory and research can be reclaimed as places for revolt and sensuality.

LOCATIONS as in sites of queerness through geographies, language and time.
LOCATIONS as in the soft landing of words onto the body creating a sensory nuisance.

The symposium includes presentations and interventions by artists Sam Hultin, Tore Hallas, Vala T. Foltyn and Ming Wong; a talk on art collections and methods by the curators of the exhibition (Tawanda Appiah, Sofia Landström, Jari Malta, Sara Rydby and Jonelle Twum); a dance performance by Sandy Harry Ceesay and a film screening of Wu Tsang’s Wildness at Panora.

REGISTRATION PERIOD IS NOW OVER

9.00am Doors open for registration and the (in)visible exhibition opens.

10:30–11am Tore Hallas, I am a holy body
Artist presentation

The exhibition (in)visible is open 9–17 on the day of the symposium.

Through city walks, collective letter readings, sing-alongs and anniversaries, Sam invites queer communities to activate a part of a queer history. In their presentation they will talk about their work with I’m Every Lesbian in Malmö and how that, via a stack of lesbian protest songs led them to the project Eva-Lisa’s Monument.

Sam Hultin (b. 1982) is an artist based in Stockholm, Sweden. Their work is based on their interest in queer history, identity and community and explores connections between personal experiences and larger political and social structures. Sam’s work is represented in the collections of Moderna Museet, Stockholm, Gothenburg Museum of Art and Malmö Art Museum.

Tore Hallas: I am a holy body

“You go to these ruins of the city that God punished as a good Christian goes to the caves in Bethlehem. You read the religious texts and see the genitals and food everywhere. You put these into your body, consume them. We eat each other, we taste each other. You are closer to God when you don’t indulge."

On fatness and queerness as both a personal narrative and a religious one.

Tore Hallas is a visual artist who lives and works in Copenhagen, Denmark. He works within themes of fatness and queerness, and fatness as queerness; religious ontologies and intention; as well as photographic and cinematographic reflection as both theme and method. Personal narratives, and the intersectionalities of violences and positionalities are under- currents in his works, along with travelling as both physical displacement and symbolic quest. Hallas has exhibited widely, and works primarily with video, photography and text, as well as teaching.

Witching the unspoken is a research that tackles the idea of queering the archives as an attempt to reclaim and reshape relations of power and knowledge. Foltyn analyses archives by tracing the invisible, hidden and lost, specifically the remains of a century old villa located in Kraków, Poland. Since its foundation in 1907, the villa has been a site of cultural activity and an important reference for the local community. The building was also home to Lamella the house of queer arts for several years until the brutal eviction in 2018. Through her practice of magic, the artist maps political and poetic narratives as a “gesture of the witching”.

Vala T. Foltyn is a performance artist, art researcher and queer witch. She is also the founder of Lamella – the house of queer arts in Kraków, Poland. She is currently working on her research at Malmö Art Academy as part of the Fine Arts in Artistic Research program.

Ming Wong is an artist based in Berlin and Stockholm, and is Professor of Fine Art specialising in performance in the expanded field at the Royal Institute of Art in Stockholm. His interdisciplinary practice incorporating performance, video and installation unravels ideas of ‘authenticity’ and the ‘other’ with reference to the act of human performativity, through a re-telling of world cinema and popular culture and re-readings of cultural artefacts from around the world. His artistic research and practice look into how culture, gender and identity are constructed, reproduced and circulated, and how it all feeds into the politics of representation.

Sandy Harry Ceesay: #2 – On becoming (from the Jérémie variations)

#2 – On becoming (from the Jérémie variations) is a performance that combines dance, poetry, image and sound into one expansive universe. Using the exhibition (in)visible as a site of thinking about history, the artist breaks ideas of linearity and instead embraces the in-between, the place that allows scattering, process and improvisation. Ceesay’s approach to the body as a container of narrative, matter that can move and feel, creates a way outside of the bounds of the mind.

Sandy Harry Ceesay (b. 1995) is a dancer, maker and writer who searches for a crossborder and changeable body through their practice. With poetic language, the artist explores the prerequisites of the body, literature and choreography. After four years in Amsterdam, where he graduated from Amsterdam University of the Arts (AHK), his interest has been devoted to form, texture and language. Ceesay reveres the body’s endless motion as a starting point for all their choreographic and literary works.

Wildness is a resonant portrait of a Latino Los Angeles LGBT bar, the Silver Platter. The film integrates elements of fiction and documentary structures to vividly portray Tsang’s multi-layered relationship with the bar, one that explores her role as an artist and activist, and a member of a younger generation introducing itself into a gay scene that started before the Stonewall riots – the Silver Platter’s birth year is 1963. The impact of gentrification and a changing city on the bar’s working class, Hispanic and immigrant patrons is something Tsang implicates herself in when the weekly Wildness party brings art world crowds and attention.

Wu Tsang is a filmmaker, visual artist, and performer who incorporates strategies of activism, art making, event planning, and stage production across a range of multi-disciplinary projects. Tsang combines or juxtaposes the avant-garde and cerebral with sensual, often emotionally charged representations that prompt deeper inquiries into how individuals and communities resist ingrained social prejudices. Her work also considers prescient debates about a generation's claim to a subculture, social gathering as a form of insurgency, and the political capacity of contemporary art.