Four teams have now been selected as finalist proposals of the Swedish competition with the motivation as follows, and each of them will be awarded the equivalent of NOK 300,000 for processing and developing their proposals in stage 2. Stage 2 runs through 2016-02-04 until 2016-05-23. In mid-June, the final winner of the Swedish competition will be announced. There will then be a Nordic final, based on the winning proposals from the different countries.

The four finalists were presented February 3 in a prize giving ceremony.

Finalists (stage 1) and the jury's comments 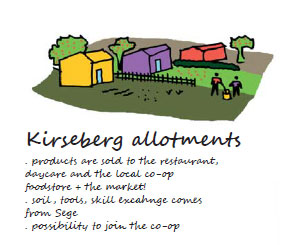 "The entry focuses on place making, processes and social activities and also features some physical proposals. It remains at a conceptual level and centres on man by, for example, building identities through art projects. The proposal requires a lot of the residents since it is based on participation, which needs to be studied and developed in stage 2, so that those who are not interested in getting involved, are not excluded. The proposal is in part clear and implemented and in part at the conceptual level. There is a model with business sense and many ideas on biodiversity. The entry is in keeping with the intentions of the plan programme.

The proposed bike tower is difficult and costly to implement and is not held to be a good solution for residents with long distances to the bikes.

One of the central pillars of the competition is that it should be cheap to live in Sege Park. Many of the elements of the proposal are costly, e.g., solar panels in façade material and energy-plus buildings, and need to be considered in stage 2. The benefits of removing living space and instead adding shared areas also need to be clarified. The proposed paddling pool has many positive effects.

The proposal focuses on new construction in Sege Park and needs to be complemented regarding the management of existing buildings.

The jury has the following comments on the processing in stage 2. A block, or similar entity that will be offered to each constructor in the land allocation, should be further processed by the team in terms of housing and construction solutions. Also existing buildings should be subject to the proposal in stage 2. Develop the sharing ideas with co-labs, co-creation, etc. and further development of Tingoteket as a makerspace. A centralised bike tower is not a good idea, but a totally different solution needs to be developed for bike storage. The thoughts on energy-plus buildings need to be developed and combined with operations and it is necessary to show how they make up a good residential environment. Design and spatial organisation need to be developed." 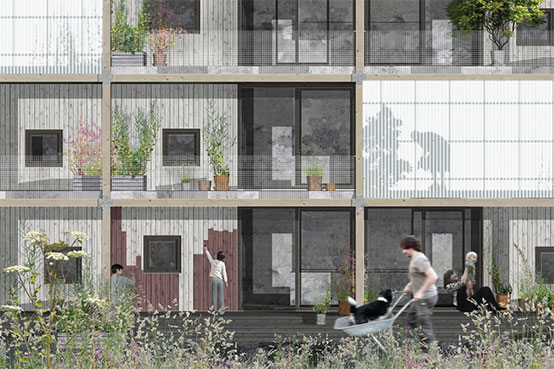 Having less to live more

Having Less to Live More

"This entry deals with housing solutions with space optimisation and flexibility through mobile walls, to cater for the changing needs of residents. There are interesting thoughts on, and insights into, conditions for the implementation of solutions for sharing, for example, getting external contractors to handle the sharing. The proposal has a business focus. The entry is clearly described. It is based on well-being, where voluntarism is important. The entry features a clear thought in a precisely defined geographical area, which favours implementation. The jury welcomes the fact that the proposal focuses on prefabricated modules for the production of buildings. The team is ambitiously assembled, including a contractor and an anthropologist.

A good starting point featured here is that there should be room for different lifestyles, and that you cannot simply assume that everyone is equally interested in everything. Another positive point is that the proposal addresses different types of households. The presentation of the realisation that sharing leads to far greater benefits than reduced living space and reduced carbon emissions is valuable. It is also positive that the proposal divides the needs in sporadic needs (that you share with others) and everyday needs (your private). The proposal sets out reduce space without moving functions to other buildings, which is positive.

How the flexibility of the apartments will work in practice, needs to be developed in stage 2. Another aspect that needs to be clarified is the form of ownership and management, is i"t a mix of owner-occupied and rental housing, and how will the construction be implemented? Still another question, is how to find a good business model that enables many people of different kinds to actually dare both move to Sege Park and, once there, participate in social life. They do set out that it is the professionals who create the area, but how is self-help and co-creation stimulated? At the same time, the jury appreciates the proposal's thoughts on creating a market place as a driving force for different types of shared functions. The jury is eagerly looking forward to a more detailed description of the goat hotel. Overall, the green aspects of the proposal need to be developed." 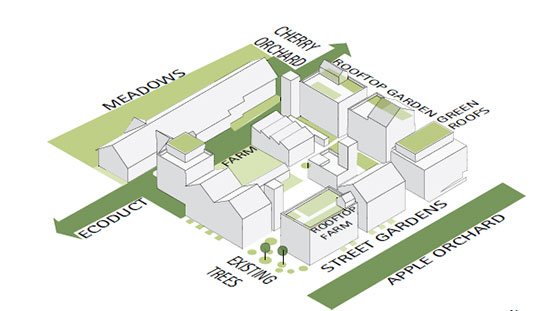 It takes a block

It Takes a Block

"The entry addresses an integrated approach to many of the aspects of the competition. Has taken the task criteria on board and featured them clearly. The proposal accounts for a gradual transformation of an existing building with a few basic areas for setting up businesses and other parts, where the (future) residents have the possibility to be involved in the reconstruction process. It is therefore one of the few submitted proposals that sees the potential of the existing buildings and their transformation.

The proposal indicates entrepreneurship and having an apartment attached to the business activities. Has the idea of farmers market, instead of having everything that is grown eaten by people living there. The farming capacity in Sege Park is limited, but an initiative with a farmers market enables more people in the neighbourhood to grow on available surfaces.

The jury has doubts as to whether the entry can be built inexpensively, since it is not clear if, or how, the housing space will be distributed/reduced, but there are extensive shared areas and functions. The entry covers a block described with functions, for which there probably are foundations in Sege Park as a whole, but probably not if more blocks would be designed the same way. The block is illustrated as closed and the jury can see a risk that it becomes something of a gated community.

The proposal has, for example, ideas on sharing of water management with three types of water quality/source. Water consumption is a resource issue, but the important resource issue is the heating of water, which is energy-intensive. A detail is that the plan programme lays down the use of plastered surfaces and brick as façade material, but the buildings described in the entry have wooden façades. Many small buildings involve high construction costs and are negative from a heating standpoint. The team is young and has the competence to calculate the carbon footprint, so they should be able to see if this solution is better than one with more aggregated building volumes.

During stage 2, the proposal needs to be better prepared and refined. The advantages and disadvantages of the clutteredness need to be settled. The risk, or intention, that the block becomes a gated community, needs to be investigated in stage 2. An idea needs to be put forward on how different functions in different blocks can be organised to provide a reasonable range of services and common goods in Sege Park. The proposal in stage 1 can be seen as a catalogue of ideas, needing screening and prioritisation in stage 2. The proposal may be difficult to implement since it is costly; in step 2 the cost estimate needs to be developed. The idea of galleries that actually can be used is appealing, but there are many examples of the opposite, so this idea must be studied carefully in stage 2. The ideas of establishing businesses are also appealing, but need to be developed. Establishing start-ups not only calls for space and facilities, but also an organisation behind." 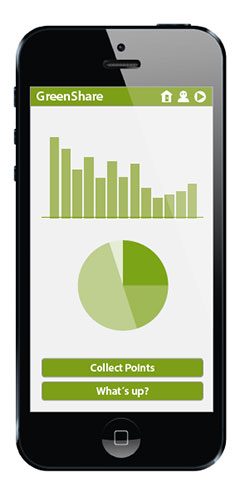 "The proposal delves deeper into solutions around shared spaces and sustainable housing. A wide range of housing solutions are featured, which may entail an increased attractiveness for different target groups. The proposal is tailored to the conditions in Sege Park and has a local presence. The proposed Generator Street, with activities of all kinds, is clearly linked to the ideas of Sege Park based on the plan programme. An interesting example is Snickarboa, something halfway between an incubator and a carpenter's workshop.

The proposal features an app with a reward system, which increases the chance of it being used; it contains, among other things, competition opportunities. Another feature is the reuse of existing solar cells, which is resource-saving. An innovative solution for the façades by way of algae-powered panels is featured. The jury does not know how it works in practice, but it may deserve to be developed in stage 2.

A social aspect is that much in the area is proposed to be decided from the top, without involving the residents. A positive economic dimension is the idea of leaving some of the construction work for the residents, which may reduce the cost of living. Apart from that, the proposal does not spell out that clearly how the cost of living, etc. is reduced, but it should still be able to be positively impacted due to extensive sharing. The team is the most diverse in terms of age, with a child of 10 years and a super senior of 73 years.

For the development during stage 2, the jury has the following comments. The economy needs to be investigated; part of what is proposed is probably expensive rather than cheap. The proposal features a concept for the entire Sege Park, which is positive when it comes to the shared street, Generator Street, but for the buildings, a block or equivalent needs to be broken out and developed during stage 2 to make the proposal feasible for a single constructor. The jury also wants to see a development of Generator Street, to make the concept more elaborate and to specify how it can be implemented. Mobile offices and mobile greenhouses are displayed that are meant to be temporarily built or possible to move, depending on how the needs change, assuming that it is allowed under the zoning plan. Technology, finance and management aspects need to be developed for this idea. The energy solutions need to be developed. The jury does not consider the proposed small wind farms economically feasible, and the solution to use pathways for solar panels needs to be clarified with respect to its advantages and disadvantages. The proposal has a child perspective, but it needs to be complemented by a teenage perspective. How can teenagers live a good life in Sege Park? The location of the laundry room and other shared functions needs to be studied and impact-assessed. It is now proposed that some of the shared areas, for example for laundry, are placed on the top floor, which might be an alternative to having them on the ground floor, but it would need to be clearly indicated. The proposed Orchard Tower is not "slim", which is a condition in the plan programme. The social and management aspects need to be developed. How do you create conditions for housing involvement and participation and how do you create good forms and processes for sharing?"

The Swedish jury members are: