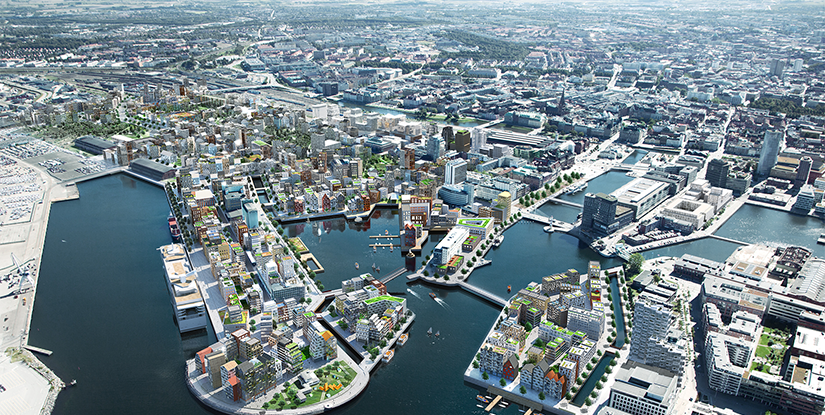 Nyhamnen is situated by the sea in direct conjunction to the Central Station. In this location a mixed neighbourhood is being developed with a mix of residential buildings and facilities for commerce and service.

The detail planning is ongoing for the area Smörkajen, the area closest to the water and the old warehouse M1 at Grimsbygatan. Further detailed plans will be started for the area surrounding Jörgen Kocksgatan as well as Vintergatan.

East of the Central Station, along the railway yard and Carlsgatan, Nyhamnen is developing with residential areas and two larger buildings for offices and the legal court administration.

Nyhamnen is transforming from being an old industrial and harbor area to an natural part of the city center. Nyhamnen will be the new front area of Malmö. On former land fillings in the Öresund, made from the late 1900’s and onwards the city creates space for work places and inclusive, public spaces with green and blue values. Once fully developed Nyhamnen is expected to have space for up to 9 000 dwellings and 21 000 new and existing work places.

The development of Nyhamnen will occur in phaces during several decades. The last phase is planned for 2040-2050.

Along Carlsgatan the extention to the east with offices and new residential buildings. The street is rebuilt for several different types of traffic and is accommodated according to future needs. Hans Michelsensgatan is made wider and given a different stretch, Jörgen Kocksgatan becomes a green main street through the area.

The harbor basin in the Nyhamnen needs a new foundation to regain marin life and to function in a city environment. The quays in Nyhamnen will be made accessible and attractive for both the citizens as for temporary visitors. In this area a new city parc and swimming facilities will be created, simultaneously as factors as the elevated sea level, extreme weather, mobility and health will be taken into consideration.

The accessibility to quays and the sea are supporing elements in Nyhamnen. The new city areas with residential buildings is being developed directly by the sea, by making new land fillings in the inner part of the Nyhamnen harbor basin, new channels aswell as two new islands by the Nyhamnen pier and along the quays towards the Dockan area in the Western Harbour.

Cars will be prohibited above land on the islands, but it will be made possible to bring the car to and forth the islands through a tunnel. Pedestrian and bicycle bridges will be links between the islands and the rest of the city, other bridges over the railway yard by the Central Station connects Nyhamnen to the oldest parts of the city center.