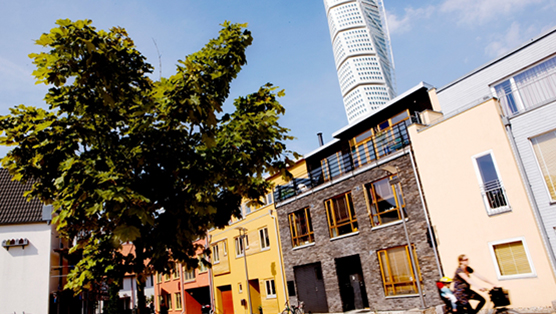 The Western Harbour is the area in Malmö which first made Malmö known as a sustainable city. The area has gone through substantial changes during the last decades and is the expansion area that has changed the most in the transcition from industrial to mixed city area. The Western Harbour has since Bo01 transformed from a decaying industrial area, into a an attractive part of the city within a comprehensive sustainable framework.

The first part of the transformation of the Western Harbour was the Bo01 exhibition area which was an exhibition on sustainable urbanism in what was to besome the first carbon neural residential area in the world. It was finished in 2001 and the last projects in the Western Harbour are planned to be completed in around 2035. About two thirds of the total surface of 187 hektars is planned at the moment.

Currently the southern parts of the area are being planned and transformed: Varvsstaden, Hamnporten and Citadellsfogen, which connects the Western Harbour with the city centre and the western parts of Malmö.

The Western Harbour conscists of land fills that were made successively from the 1770’s until the latter parts of the 1980’s.

The land fills were made to create space for the harbour and industries, especially for the expanding Kockums Mekaniska Verkstad during the latter part of the 1880’s. During the prime period in the 1950’s and 1960’s Kockums was one of the largest ship yards in the world with about 6 000 empoyees. After the oil crisis at the end of the 1970’s the shipbuilding industry experienced increasing hardships and in 1986 a decision was made to end the manufacturing of ships in Malmö.

Bo01 in 2001 was the start of the transformation of the Western Harbour into a mixed city neighbourhood. In addition to being an exhibition area a new neighbourhood with innovative sustainable solutions was created, with exiting architecture and urban qualities. In the projects Flagghusen, Fullriggaren and Kappseglaren new environmental techniques and sustainability have been in focus and the municipality has been driving the development together with construction companies.

Today there are many different functions in the Western Harbour. Several head quarters and businesses, amongst others media companies, environmental techniques and contracters have established themselves in the area, as Malmö University that has it’s head office here. At the moment about 16 000 persons are working in the area in more than 400 different companies.

The goal for the Western Harbour to be a national example of sustainable urbanism has been optained. But the area is far from finished and still has the potential to continue to be developed into a sustainable urban neighhbourhood with a high standard of living.

The Western Harbour in 2031 – a sustainable good life for everyone

In 2031 the Western Harbour is expeced to have about 25 000 inhabitants and as many persons working in the area.

The vision for the Western Harbour in 2031 provides the common vision of the city for the areas continous development until 2031, 30 years after the housing exhibition Bo01.

It builds upon ulterior visionary concepts on the mixed city and that the area should be a national example of sustainable urbanism. But the ambitions for the area have been risen since then.

The Western Harbour in 2031 addresses physical issues as well as other changes in citizens values and behaviours. There must be changes in order to make the vision real for a sustainable and good life for everyone.

The housing exhibition Bo01 was arranged in Malmö from May to September 2001 and is the first climate neutral neighbourhood in the world. All energy that was consumed in the area came from locally produced renewable energy sources sun, wind and water. The area is 22 hectars and has 1 425 dwellings, offices, functions and a parking house and is still en model of sustainable urbanism and a meeting place for all citizens of Malmö.

The housing exhibition consisted of an exhibition area, where the theme “The city of the future in the information society of the future” manifested in amongst other art, design and landscape architecture. It was a whole new part of the city situated in the Western Harbour with buildings designed by a number renowned architects. In this part of the city there were built everything from student apartments to apartments for elderly. However large parts of infrastructure – for example shops and schools – was meant to be developed after the exhibition.

The exhibition architect was Klas Tham, professor emeritus at the technical university of Lund. His ambition was to create a varied urban environment inspired by both the medieval type of city called the Hansa city, as by the small scale urban projects of the British architect Ralph Erskine. The ecologically profiled neigbourhood consists of alleys, small canals and building of varied hights. Higher building create a shield against the blistering winds of the sea front and within lower denser buildings. This means that the coveted view of the sea is reserved for the buildings facing the sea.

In the beginning of the 2000’s the company Dockan Exloatering AB bought the northern parts of the Western Harbour by the shipbuildinger Kockums Mekaniska Verkstad AB. The developers Wihlborgs, JM and Peab owns each 30 percent of the company. The intention is that the area shall be half commercial surfaces and half residential. Wihlborgs is responsible for the development of the commercial facilities at Dockan and JM and Peab develops the housing.

Flagghusen were finished by year 2008 and is the second phase of the development of the Western Harbour. There are 650 apartments in the four hectar large area, whereof 62 percent are rentals. Thirteen developing construction companies developed the area in dialogue with the City of Malmö and the architects. In the area there is a preschool, one LSS (special needs) accommodation and commercial facilities on the ground floors.

Fullriggaren is phase three of the development of the Western Harbour. There are 645 dwellings on 4,5 hectar large surface whereof 85 percent are rentals. There are also two office buildings, a parking house, a pre schools and nine LSS (special needs) facilities in the area that was the largest assembly of passive and minienergy buildings when it was finished in 2013. It’s also the largest area in Sweden to collect organic waste with food mills in septic tanks for production of biogas and with a separate energy grid. Renewable energy is produced through solar collectors and solar cells. The green space is shaped after special biotopes, birdhouses, nest for insects and birds and threes and bushes are berry and nectar giving.

Varvsstaden is a 182 00 square meter large area which will be developed during the coming 20 years or more. The construction is ongoing in the south west part of the area and several older buildings are transformed. The detail planning is made of Vagnsverkstaden.

The land is owned by Varvsstaden AB, which is planning to build 2 500 dwellings together with facilities for commerce and offices, restaurants and cafées, an elementary school and a pre school. In the south west part of Varvsstaden there is already a new elementary schoold and the construction of a pre school, several blocks of residential building, offices and a parking house.

Varvsstaden will be connected with the city center with new bridges. A new pedestrian and bicycle bridge over the canal by the inner harbour and on between Beijerskajen and Varvsstaden. The area will be opened to the public and be completely accessible by 2025.

In the heart of the Western Harbour Skandia AB develops the 100 000 square meter large area Masthusen on land formerly belonging to Kockums Mekaniska Verkstad AB, the SAAB car factory and the Malmö Fair, into a neigbourhood with 1 900 dwellings, around 600 student apartments, about 1 200 work places, two pre schools, a home for elderly, a LSS (special needs) facility, an elementary school, a supermarket and other kinds of services such as a library, restaurants, cafés and shops. Masthusen was the first neighbourhood in the nordic countries to be certified by the international sustainability system BREEAM Communities.

The last phase of the development of Masthusen is in process, as for the construction of student homes which will have 590 apartments, Malmö’s first mobility house and a pre school with green surfaces on both land and the roofs as well as 500 new dwellings. In the area the former industrial building Hall 7 is being developed, with work places that promotes a healthy life style, simplifies everyday life and respects the environment.

The proposed detail plan contains three new residential blocks with about 170 apartments and the possibility for shops and facilities for different functions on the ground floors. The buildings varies in hight between four and seven stories, and up to ten stories along Västra Varvsgatan.

Citadellsfogen constitutes the entry to the Western Harbour in the south west, which will become a dense and mixed neghbourhood with housing, offices, a parking house and city center facilies. Along Citadellsvägen a new senior high school is planned that will be finished in year 2024.

The City of Malmö developed a value program for Citadellsfogen in 2012, which has served as a foundation for the detail planning in the area. In connection to the new detail plan for the area, during 2021 extensive landscaping, demolitions and land remediation take place. A new detail plan is already finished for the eastern part of Citadellsfogen, the block Abborren, where new dwellings and offices are being developed.

Galeonen is situated in the far north and is the last part which is being developed in the Western Harbour. Here a new metro station might be a reality for a coming metro connection between Malmö and Copenhagen. Galeonen is beautifully situated by the water that in the future can offer a mixed urban environment with dwellings, an elementary school and pre schools. An inquest on the metro is ongoing and will also be needed on how a protection of the coast line could be made by the inlet to Malmö.